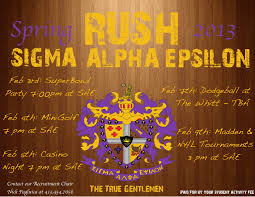 So after some troubles our chapter ended up second smallest by the start of our previous fall semester. Our fall rush went really good doubling us in size. Now one other person and I have been made the ENTIRE rush committee! Spring rush is coming up and we’re going to need to get a decent sized pledge class to replace our leaving seniors. What are some good ideas for spring rush, since it isn’t formal? I know get out there and meet people, but what are some ways? Thanks!

Congratulations on the huge class in the fall. That should give you some great momentum to succeed this semester.

Realize that while you and another guy are the entire rush committee, it is not your job to recruit every new member. Your job is to organize rush in a manner that gives your fraternity the best chance to recruit as many guys as possible.

To organize your fraternity recruitment in an efficient manner, I would focus on these steps:

1) Plan everything well in advance. The rush calendar should be complete before everyone gets back for the spring semester.

2) Make sure brothers realize their obligations. Your brothers are probably normally scatter-brained, but even more so at the beginning of the semester. Be sure they know exactly where to be and when to be there.

3) Review your names list. Your fraternity should have been building a database of names of potential guys to rush last semester. Review those names and pick out the guys who you especially want to target.

4) Assign responsibilities to brothers for leading the recruitment of certain guys. For example, let’s say Rushee A is a guy you want to target. You think Brother B would be a great guy to lead in his recruitment. Be sure to let Brother B know he is going to be responsible for Rushee A’s recruitment. This means he will make sure he makes Rushee A is aware of all rush events. He will make sure he has transportation to get there. It is Brother B’s job to become this guy’s best friend. Hopefully this will lead to a commitment.

5) Continue to build your names list. Send out an email blast asking brothers if there is anyone that should be added to the names list before the semester starts. Not only will this make potential new members more visible, but it will also get the brothers to start thinking about spring rush.

6) Prepare your rush budget. You have been given a limited amount of money to be successful during rush. Be as efficient with that money as possible. And note that spending a lot of money isn’t the reason why guys join fraternities.

7) Ask for help. Recruit more guys if there is more that needs to be done than what the two of you can possibly handle. Go to a brother with a specific request and ask if he’ll help. Even though the other brothers aren’t on the rush committee, it doesn’t mean they can’t still be active in the planning of rush.

8) Get smart on recruitment. Checking out these resources will help:

And most importantly they are motivated. Guys are probably the most motivated and gung-ho about fraternity the semester after they are initiated. Take advantage of it.

Also, I am curious what you did that made you so successful in the fall. Whatever that was, do more of it. There is no need to re-invent the wheel. It sounds like you have already cracked the code on how to recruit. Whatever you did, do more of it.