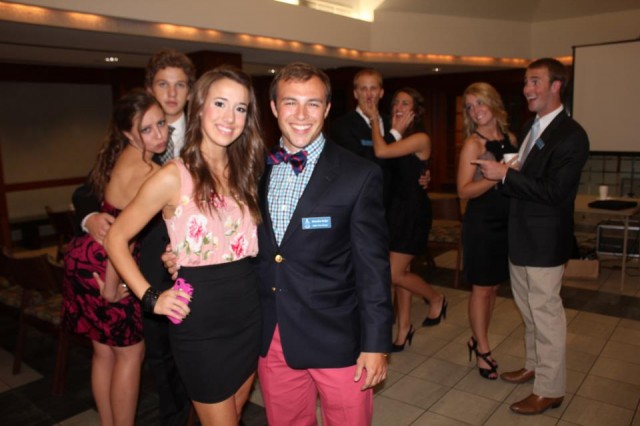 Fraternity recruitment themes and ideas are fun to implement with your fraternity.

But they just aren’t the underlying reason why guys will join your fraternity.

A good theme doesn’t recruit people on it’s own. It’s all about strategy.

So what are the best ways to get the most quality guys to join?

Don’t complicate recruitment. Most fraternities out there spend hours upon hours dorm storming and meeting strangers for recruitment. This is awkward for your brothers and is incredibly inefficient. You will have a low success rate with that strategy. Instead, focus on recruiting your friends and acquaintances – especially high school friends who will be freshmen at your school.

For example, I had a friend who was a freshman when I was a junior. We attended the same high school and knew each other from the golf team. Because of our age difference we really didn’t know each other that well though.

I got in touch with him the summer before school started when I found out he was going to attend my school. I invited him to rush and after a few events he joined without much convincing.

It was much easier to get him to join because we already had an established relationship. He trusted me because we were friends. This made the recruitment a lot easier and honestly a lot more fun.

2. Recruit the Friends of Your Friends

To continue the story from the previous point, my friend from high school had three friends who were freshmen at the same time. We were able to get these three guys to come out because of my friend.

It really wasn’t hard to get them to come out. We had a great event planned, and I asked my friend if there was anyone he thought would be interested. He introduced me to these three guys and we hit it off right away.

These guys were easier to recruit because it was four guys almost treated as one. During rush, it is easy to forget about a guy who is by himself. However, a fraternity will never forget about a group of four guys. Because of this, we gave them added attention and they ended up joining.

All four of these guys ended up on the executive board at some point of their college careers. These guys used the same formula to recruit a bunch of their friends through the years.

Recruiting friends and friends of friends should be the foundation of your fraternity’s recruitment strategy.

Remember that the guy rushing your fraternity will know nothing about you guys. You have to tell him and show him why he would want to be a brother.

Remember though that every fraternity will eventually talk about how close their brotherhood is during recruitment. Every brother will explain that he would do anything for any of his brothers because they are a family.

However, do your actions match your words? Your actions will speak louder than your words if you explain how close your brotherhood is one minute, then talk junk about a brother behind his back the next. Be sure not to give those mixed signals.

4. Plan Fun Recruitment Events that Your Brothers Want to Do

Treat recruitment events like brotherhood events. By focusing on having events that brothers want to do, you will accomplish a two things:

First, you won’t have as much issue getting brothers to come out and have a good time. And if everyone has a good time, then the guys you are recruiting will see it. This will make for a much more successful event.

Two, if you are having events that the brothers actually like, and you find recruits that like them too, then they will probably be a good fit for your fraternity. Don’t forget a key point to developing relationships with recruits is by finding mutual interests.

5. Get Smart on Fraternity Recruitment

You are off to a great start by reading this article. There are tons of other great resources out there. Be sure to check out the following:

• Read my book The Fraternity Leader. It has 26 pages of recruitment advice which describes a systematic process that will explain how to recruit efficiently and effectively. By implementing this process your fraternity won’t have to recreate the wheel every semester and you will be more successful recruiting than you can imagine.

The #1 Secret to Fraternity Recruitment

The Most Important Trait of a Good Fraternity Recruiter

10 Signs that Your Fraternity’s Rush Sucks

12 Reasons Why You Want Your Fraternity to Grow