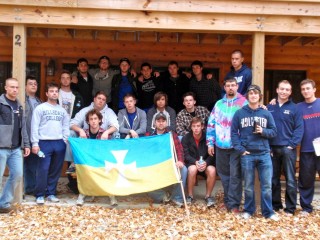 One of my pledges is having surgery on his shoulder next week and the following 2 weeks he will be on Vicoden.   This means he will be missing most of the pledging process.

I don’t want to give him a jail out of free card because it wouldn’t be fair to the rest of his pledge brothers and I don’t want to kick him out of the process because he’s a quality person that this fraternity needs.  Is there a creative alternative pledging process that I can have him do at home in the meantime? (No hazing).

Unless I’m mistaken – the goal of your pledge program is 2 things.  First, you want to make sure the guy you gave a bid to is going to be a good brother.  Two, you want the pledges to learn enough about the fraternity to become contributing brothers.

I am sure by now you have made your determination on #1.  Otherwise you wouldn’t be asking me for an opinion.  #2 isn’t as important – that will be learned eventually as long as he meets the criteria of #1.

Don’t ever forget this during a pledge period.  Once you have determined that a guy is high caliber and has the qualities you are looking for – don’t let him escape.  Think about how hard it is to find guys of his quality.  You can’t afford to let them slip away.

My suggestion is you lengthen the pledge period by one week.  This week have a bogus pledge week where your guy won’t really miss anything.  Turn the pledge night into a brotherhood event where everyone has a good time.

Then next week, continue with the pledge program as normal.  Your boy will miss that week.  Then by week 3 he’ll be good as new and he’ll have only really missed one week.  In the meantime, give him some material to review if he feels up to it.

It would be insane to lose a guy because of this situation.  It would be a poor business move and a poor brotherhood move.  From the sounds of it, this guy has the potential to be a key contributing member of your fraternity.  Don’t risk losing a brother for a lifetime over a few weeks of inconvenience that he couldn’t help.