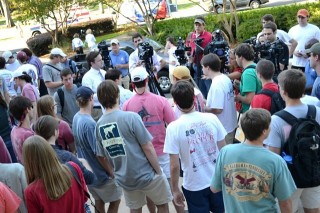 You will make mistakes as a fraternity leader.  Judgment becomes clouded at times with college guys, and the results aren’t always pretty.  However, how a person responds to adversity reveals a lot about his character and is a key for personal growth.

For example, I was an RA in college.  I had recruited a guy down the hall to pledge the fraternity.  He was a good guy, and we thought he would become a solid addition to the fraternity.

One night the fraternity was having a party.  The pledge decided to drink a fifth of vodka by himself at a buddy’s house before the event.  The guys he was with were not part of the fraternity.

Needless to say, when he showed up at the party he was scary drunk.  No one really knew how much he had to drink because no one was with him when he was drinking.  He was in really bad shape though, and I drove him back to the dorm.

On the 50 foot walk from the car to the dorm, the pledge fell a couple times and made a scene.  It was all I could do to get him in his room.  Fortunately, his roommate was there and agreed to take care of him.

Grateful that I had this guy off my hands, I went back to the party (poor judgment).  However, I got a phone call shortly after that the pledge had been taken to the hospital due to alcohol poisoning.

It turns out that the scene the pledge had caused some concerned folks to call the campus police (good judgment).  The campus police opened doors in the dorm until they found the pledge.  They then called an ambulance and had him taken to the ER.

Evidently it was an interesting trip to the ER.  The pledge punched a nurse, and yanked the hair out of another.

The pledge ended up having a 0.36 blood alcohol level, and had hit his head really hard somewhere during the night.  He had a severe case of post-concussion syndrome.

I had made several critical lapses in judgment during this ordeal.  I had not been the one to get the pledge help.  I had essentially condoned his underage drinking as his RA and the president of his fraternity.  I had left him in a pretty bad state.  I probably deserved to lose my job and the fraternity could have been punished as well.

I came clean with my boss at the university, and told him the entire story.  I then went out of my way to make the situation right.  I stayed with him in the hospital, and took him to and from for his follow-up visits.  I called his parents to explain the situation.  That wasn’t much fun.  I counseled the rest of the residents and brothers about the dangers of misusing alcohol.

Because I went above and beyond after I made my mistakes, I was able to keep my job.  I learned a lot during the experience, and grew from it.

Unfortunately, the same couldn’t be said from the pledge.  He was terribly embarrassed by the incident, and ended up quitting the fraternity.  The brothers weren’t really sad to see him go after his performance that night.

The point though is to recover in a world class way when you make a mistake.  Adversity is the true test of character.  People will define you by how you react to trying circumstances.  If you react and recover in the right way – your fraternity and you will be better off.