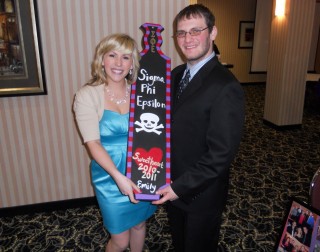 Some fraternities have the tradition of lavaliering a girl into the chapter. This is an unofficial ceremony that essential grants the girl honorary membership rights into the fraternity. Each brother is normally allowed to lavaliere only one girl. Typically, the most important benefit to the lavaliere is that the girl gets to wear the fraternity block letters. This is a symbolic gesture, but very important to a lot of fraternities.

In my opinion, every brother should make it a point to lavaliere one girl during their college career. It is great if the girl is a long-time girlfriend that the brother plans on marrying. However, it doesn’t have to be that way.

The big picture here is that if a girl is lavaliered, then she will become a supporter of the fraternity. She will wear the letters around campus which will bring positive publicity to the fraternity. The brother that gives the lavaliere will become more excited about the fraternity because he will have brought another ‘member’ into it. Also, I have yet to be around a fraternity that had too many girls supporting it.

This is a simple and classy event that doesn’t cost anything and will create the perfect reason to have a big party. It will be fun for everyone, and that is the biggest benefit.