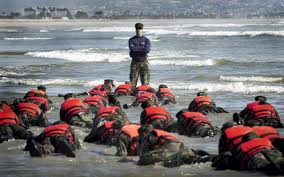 For the record, I am 100% against any fraternity having a hell week that involves hazing. However, there often are benefits that happen during hell week, often in spite of the hazing.

For example, I admit that it was during hell week that I built a very special bond with my pledge brothers. It was late one night, and the brothers were too busy chasing girls to worry about the pledge class. So we spent the entire night talking about how great we were going to make our fraternity. We laid out plans and goals. We discussed who was going to run for executive board positions and how we were going to support them. It was at that moment when I first realized that fraternity meant as much to these guys as it did to me. It solidified in my mind that I had made the right choice by pledging.

That being said, it is possible that that night could have happened without hell week.  However, I do not argue that the reason we were together that particular night was because of hell week.

Also, hell week gives a focus and finality to the pledge period. This focus drives pledges to learn their pledge material and be prepared for their initiation tests. Hell week ensures that the pledge program ends with a flourish, and not with a whimper.

Like I said, I think these objectives can be accomplished without having a hell week that focuses on hazing. It is up to the pledge marshal and brotherhood to be creative enough to build the pledge class in a respectful manner.