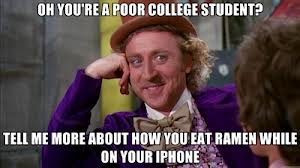 I don’t come from money, and fraternity dues are a considerable amount of money for me. Because of this, I am going to need to hold down a job while in school. I would like to know if it’s possible to be in a fraternity and keep a job of about 15-20 hours a week?

I feel your pain.  I paid my way through school by working and taking out student loans.  Making ends meet wasn’t always easy, but it was definitely worth it in the long run.

One thing that made it easier for me was I was smart with the jobs I had.  I was an RA for two years, and this essentially paid for my room and board.  The job was demanding at times, but was not a time-sucking burden like most jobs.

After that I worked as a student aide in the Greek Life office.  It didn’t pay much, but was very flexible with my schedule.

My final year of school I had the best working arraignment though.  I worked as a summer co-op at IBM.  They held me on during the school year and I could work the hours I wanted.  I scheduled smart – and had only early classes.  Because of this i was able to work the afternoons and weekends.

My roommate had an even better arraignment than I did.  He worked twice a week from 4 to midnight at the copy center in the library.  He job consisted of making sure all the copiers in the library had paper and were working properly.  Essentially he had to work an hour and then had 7 hours to kill.  During this time he could do whatever he wanted.  It was a pretty sweet arraignment.

For guys like us, taking advantage of the summer and winter break is critical.  You have from mid-May to mid-August to make money to save during the school year.  Try to get a good paying internship.  If you can’t do that, work a job where you know you can make good money like construction.

One of the best jobs I know about during winter break is becoming a temp for UPS/Fedex.  They need temps during the holiday season to help the drivers run boxes to front doors.  This is a great gig and pays much better than any job at the mall.

Most importantly, be sure you are diligently saving.  It is natural to want to blow your money because you worked hard for it.  You will receive much more value for your money though if you save it to take care of your responsibilities.

Another avenue besides work is to take advantage of is scholarships.  It is definitely a pain to put together a scholarship application.  Once you do it once though, chances are others are going to be very similar.  Your fraternity is sure to have scholarships available.  Your parent’s employer probably does.  There are a ton of good avenues for scholarships.  A lot have very few applicants.

If I had to do it all over again, I would have been in ROTC in college.  ROTC pays for school, and gives you a stipend during the year.  Granted, you have to serve in the military when you complete school, but I think this is something everyone should do anyway.  This would have really helped me make ends meet.  More importantly, serving sets your career up on a solid foundation.

Something that always frustrated me was the brother who complained about not having the money to pay his dues, but obviously had the money to pay for other things.  For example, a brother would be behind a semester on his dues, but would have the latest iphone and other toys.  He would also buy a case of beer or two every weekend.  The guy obviously had the money, but paying his fraternity dues was not high enough of a priority of his.  This infuriated me because I sacrificed those things to meet my commitments.  Do not be this brother.

I agree that being a brother in a fraternity is expensive.  For a lot of us, this was an unplanned expense and was a tough pill to swallow.  However, with having the advantage of graduating and looking back, I promise you fraternity membership is one of the most solid investments you can make in yourself.  The leadership lessons you will learn are not available anywhere else on campus.   These lessons will serve you well in your future career.  The friendships you make will lead to treasured memories, and you cannot put a price tag on that.

Finally, I think you are fortunate to be in this position.  I know it seems tough now, but you will appreciate the fraternity a lot more since you are the one footing the bill.  When you are given something and you don’t have to work for it, you tend to take it for granted.  You will have richer experiences because of your hard work.  This builds character, and you cannot put a price on that…