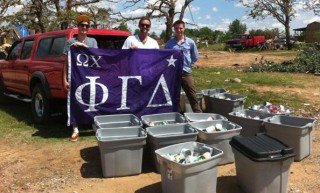 This is an article from a brother from Pi Lambda Phi Fraternity at Christopher Newport University. A donation to his chapter was made on his behalf for this submission. Go here to learn more about this program……

Here’s a thought on how to reinvigorate your chapter, unite your brothers, strengthen recruitment, and impress your (Inter)national Headquarters: Values Congruence.

Values Congruence comes in 3 forms. The first relates to how closely your personal values match that of your organization’s values – the organization being your fraternity. The second is explained as how consistent the values demonstrated through one’s actions are consistent with what that person claims to believe in. Lastly, values congruence can refer to the compatibility of your fraternity’s values with the values of the school or community it operates within. We’ll be focusing on the first two for this article, however.

Brotherhood, Unity, Pride, Trust, etc. We all learn them at some point as a new member. The tricky question is: do we simply learn what the words are, or what they mean? Usually it’s the former. New members all over the country could spit back any random list of fraternal values at any time, literally any time, under any circumstances. But what good is that? Isn’t it time brothers walk the walk after new members are constantly hearing them talk the talk? If you can convince your brotherhood to buy in to this new idea of recommitting to the fraternal values you pledged to uphold for all eternity, you’ve opened dozens of new opportunities.

The first opportunity is to reinvigorate your chapter by uniting your brothers around a common cause. This may require taking a step back and becoming an outsider looking in, followed by asking yourself and your chapter an interesting question: “If the letters on our shirts, chapter house, and brotherhood pins changed, would our chapter?” Oftentimes, the answer is no. Every chapter of every fraternity has their own local culture, but why should it replace that of your organization’s, when it could easily be an effective supplement? Everybody already knows the values and swore to live by them, so why not pay tribute to the ideals of the founders (who’s names I’m sure you’ve memorized) and to the headquarters you pay hundreds of dollars every year, and recommit yourself. The aforementioned question is bound to ruffle some feathers, but if your brotherhood as a whole can decide to uphold the values of your chapter, what a positive movement towards chapter unification you’ve just inspired! Round of applause…or snaps…!

The benefit this newfound values congruence has on recruitment is beyond obvious. No longer do you need to rely on parties to find guys who are the most fun to hang out with, or constantly advertise cookouts and other rush-type social events to seek potential recruits. Rather, you can spend your time and effort publicizing the values you and your brothers are working to embody and attract men who already place emphases on those values. What better guys to represent your organization in the future – guys who are walking the walk before even hearing brothers talking the talk during their education process? Hell yeah!

Lastly, such efforts and recommitments will not go unnoticed by your governing body. Your (Inter)national headquarters can’t help but to respect and support the effort your putting in – maybe even using you as a model for future values congruence efforts among other chapters. Imagine having all chapters practicing values congruence. That would completely redefine what it means to be a brother among the different chapters. Values congruence will keep you infinitely bonded to the rest of your brothers across the country as opposed to a couple memorized lines and a few random Greek letters. Now that’s fraternal excellence. That’s brotherhood.