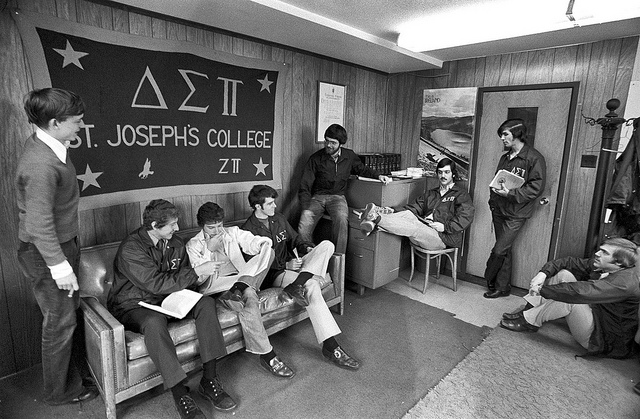 I’m going to start with a short story about fraternity ideas and how they get supported.

Luke is a true fraternity guy. He attends every event and holds the Director of Fundraising position in his chapter. He loves the fraternity.

Good news! Luke feels he has done great on his final, but as he is on his way home, he receives a call from Robby, the President. Robby tells him he is being docked an attendance point for not attending last night’s event.

Although he sent an email to Robby stating he could not attend because he had to study, Robby is only following their chapter’s bylaws and procedures (as a president should), which states studying is not an excused reason for absence.

Because Luke feels he contributes much more, sometimes twice as more than some of his other brothers, he feels he was treated unfairly. However, Robby was just following their chapter’s policies.

At this point, Luke must take the hit, because that’s what the current chapter policies say. Nothing he can do about it (unless the chapter policies provide a way to make up missed events). However, the more he thinks about it, the more he believes their attendance policy is flawed and a revision is needed, but he doesn’t know where to start.

This is a common scenario that occurs in fraternities across the country and is a perfect dilemma to illustrate how big change is made in a fraternity or in any other work place or organization.

There are three stages in introducing big ideas in your fraternity:

1. How to Create a Great Idea and Get Your Brothers to Like It

First, you have to have a good idea. When you think of one, talk to people you are closest with about your idea to see if they like it.

Does your idea add value to the fraternity? Is it a negative change, or positive? Will it make your chapter more efficient? More fun? Why are you introducing this change? What is it solving?

Type out your idea and make sure you answer the following questions:

1. What is the problem?
2. What is your solution?
3. How will it help?
4. What problems do you foresee if your idea was implemented?

This will act as a first draft of an official proposal to your chapter.

2. How to Promote Your Idea Before You Announce It

So going back to our story, Luke creates a first draft of a proposal for a new attendance policy. His closest friends think his new idea is great and offer some positive and negative feedback and he refines his proposal accordingly.

A couple weeks before a chapter meeting, Luke starts pitching his idea to a few brothers at a time and he makes sure he ends up talking to at least half of them.

This process eases brothers into the idea so they are more familiar with it than if he were to suddenly announce such a big change at a meeting. This means there will be more acceptance of Luke’s idea, less questioning, and more people than just Luke to back it up.

This is the same way we can begin to implement our ideas or solutions in our jobs or careers.

3. How to Implement Your Idea and Get It Accepted

To conclude our story, Luke takes his revised and completed proposal and brings it to a chapter meeting. It is voted on and passes.

Because Luke had a well-written proposal that was revised multiple times in accordance with people’s feedback, his idea was accepted with little apprehension. More than half of your brothers in attendance to the meeting should already know and like your idea from the second stage of this process.

It may help to practice your pitch for the chapter meeting before hand. That way, when you announce it you will sound confident, which builds people’s trust in you and your idea.

Seriously, this works every time. What makes this method so great is that through your brothers’ feedback, you are essentially bringing an idea that everyone collaborated on to the chapter – not just one person. Let’s recap.

1. Come up with a great fraternity ideas. More often than not, coming up with a great idea is easier with a small group of people than just by yourself.
2. Write your idea down in a clear, and professional proposal style format.
3. Pitch your idea to at least half your chapter by a few brothers at a time and refine your proposal when/if necessary.
4. After a couple weeks of spreading your idea around, bring your completed proposal to a chapter meeting and bring it up for discussion.
5. After it’s passed and accepted, help with the implementation to make sure it is being followed accurately.

I used this same technique to implement a positive attendance policy, a chapter business, and more in my own chapter. I hope it helps!

This article is contributed by Reggie Paquette, a brother of Delta Sigma Pi and a senior at Cal State University, Fullerton. Reggie is a frequent contributor to thefraternityadvisor.com.  Follow him on Twitter: @reggiepaq.