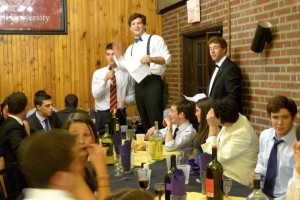 A fraternity formal should be the highlight of the year.

It combines all the ingredients for a perfect event, and brothers look forward to it all year.

My fraternity was no different, and I somehow found myself as the formal chair my final semester at school.

Many fraternities make their formals too expensive which eliminates the possibility of some brothers attending. That was the last thing I wanted to see happen, and thus became the main focus in planning the event.

I wanted to plan an event where the entire cost was known and paid up-front to eliminate any hidden charges that typically occur with these events.

I had decided that we were going to go to the beach for our fraternity formal. It was within driving distance, so travel was easy. It was the off-season, so houses could be rented cheap. As a matter of fact, we ended up renting four houses that formed a quad.

This made for the perfect setting for fraternity formal, and also made pricing flexible.

Pricing was flexible because the rooms on the top two floors of the houses were nicer than those on the bottom floor. Because of that, we were able to charge brothers more for the nicer rooms. Because there were cheaper rooms available, everyone was able to participate.

My date and I arrived early Friday to make sure everything was set up properly. We had door tags made for each room so everyone would know where to go when they arrived later that evening.

On each bed we had a rose for the date along with t-shirts for the event. The t-shirts were optional, and that helped reduce costs for brothers who were not interested. We had designated one house as the party house, and had the fridge stocked with refreshments for the party that was going to occur when everyone got to town.

Brothers arrived later that night, and were impressed by how well the setup was planned. This ensured we got off on the right foot. From there, everyone eventually made it to the party house and everyone had a great time.

We had meals prepared and delivered to the house for each breakfast and lunch. This kept expenses to a minimum and ensured brothers didn’t disappear for hours on end.

The highlight of the event was the Saturday night dinner. We reserved a private room at an upscale restaurant. We hired a DJ on the restaurant’s recommendation. Everyone was dressed in tuxes and dresses, and it was a fantastic time.

The key to a fraternity formal is eliminating hidden expenses

Everyone knew what they were getting into when they agreed to attend. The only expense not covered was liquor.

100% of the fraternity ended up attending and had a great time. Even the guys without dates attended.

It is important to remember to include every brother for a fraternity formal, the highlight event of the year.

It will keep your brotherhood strong and excited about being in the fraternity.