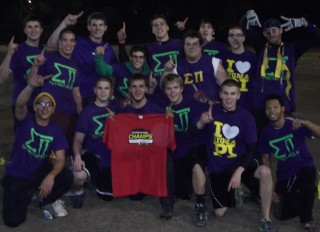 They say that the front door to a university is their athletic program. Fraternity life is very similar.

Intramural football is probably most important. There are two keys to flag football. First, the defense has to get pressure on the QB. The defense has a serious advantage because the rules in most leagues stipulate that the offensive line cannot block with their hands. The simple formula for success is to rush more guys than they can block. If they have three guys in to block, you need to rush four. The rest of the players on defense should play a zone ensure they don’t get beat deep. And then, wait for the QB to make a mistake. If you get pressure on him, he will. By taking away the deep play, you give the QB more opportunities to make a mistake. Again, eventually he will.

On offense, you need to take advantage of the soft zone. Nearly every flag football team I have ever seen has played a cover two defense. This means that there are two safeties deep, and three LBs covering the middle. To beat this zone, you need to flood the zone. Put two receivers in a spot where there is only one guy to cover them. Also, exploit the seams of the defense. Spend a little time developing a few plays that should work, as well as an audible to call when the opportunity presents itself during a game.

Basketball is a tougher game. Superior strategy can beat superior talent in flag football. Rarely does that work in basketball. Most fraternities can put a decent starting five on the court, and there is a serious drop-off when players come in off the bench.

Because of this phenomenon, each fraternity should decide what they are attempting to get out of their intramural basketball team. If they are looking to win, they need to go with their best six of seven players and have everyone else check their egos at the door. If they are looking for camaraderie, then the better players need to realize that they should share the spotlight with the rest of the team. Either way, a clear objective needs to be set.

One of my biggest regrets from college came from a intramural basketball game. There was a technical foul, and our team had two free throws. I went to take them because the game was close and I thought I was the best free throw shooter on the team. Another brother wanted to shoot the free throws, so he went to the line too. He asked me if he could shoot them. I told him I was going to because I was captain of the team.

Looking back, it was a jerk move. I was being a ball hog, and chances are I was going to take the next two shots in the game anyway. This brother wanted to shoot the free throws, and I should have let him. It would have made him feel better at the moment, and didn’t mean a damn in the grand scheme of things.

The lesson that taught me is to never lose focus of the big picture. A brother’s feelings are always more important than the score of a game.