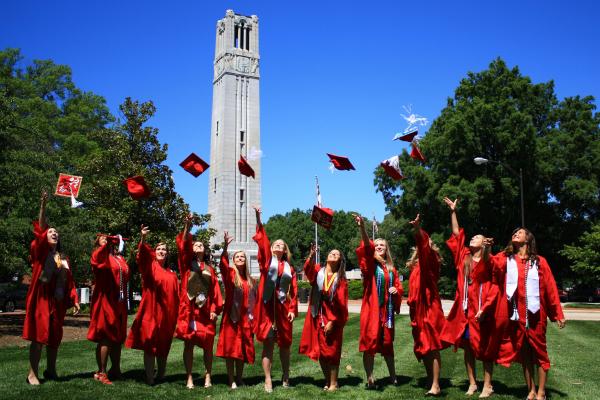 I had a special honor last night – I was invited to speak to the women of Kappa Delta Sorority at NC State.

This was a first for me, and to be honest I wasn’t quite sure what to expect.  I have given my keynote presentation to men several times, but never to women.  I knew our leadership challenges were similar, but it is always a bit daunting navigating uncharted waters.

Quite simply I was overwhelmed by the experience.

Initially I was overwhelmed by the presence of my mentor, Mindy Sopher.  Mindy did more for me to succeed as an undergraduate student than anyone else.  Mindy is special to me because she believed in me more than I did.  She pushed me to become a better me, and I owe a lot of the success I have had in life to her.  I was ecstatic to see her again after way too many years.

I was also overwhelmed by the immaculate, brand-new Kappa Delta house and their 120 members.  This was the most extraordinary Greek House I had ever been in.  It was very impressive.

Finally, I was overwhelmed by how these women conducted themselves.

While I gave my presentation, the women were engaged and attentive.  It was very apparent that they took this opportunity to learn seriously, realizing by doing so they could improve their chapter.  After I spoke I had the pleasure of meeting several of the sisters  They were confident and well-spoken.   And when I left, they gave me a gift with a sincere thank you note.

I can’t overstate how impressed I was with the class these ladies exemplified.

When I left, I couldn’t help comparing sororities to fraternities.  It seems like women’s groups are doing better than the men’s groups on nearly every campus.

And then I started thinking about a point I make in my presentation:

You get one point in life for coming up with your own idea, but you get two points for stealing someone else’s.

Guys – sorority women have cracked the code on running a successful Greek chapter.  Their members succeed in every way, especially academically.  They don’t beg freshmen to join their chapters, they select the most qualified ladies.  They don’t live in run down houses, they live in mansions.

You would do your fraternity a world of good if you humbled yourself and learned about how they run their chapters.

Does this mean turn your fraternities into sororities?  Of course not.  It means learn more about what makes sororities successful.  If any of the ideas would fit in your chapter, then use them to make your chapter better.  All Greeks win when that happens.

Again, I sincerely appreciate how welcome the Kappa Delta Sorority at NC State made me feel yesterday.  It was one of those moments that made me really proud to give back to the Greek community which has given me so much.