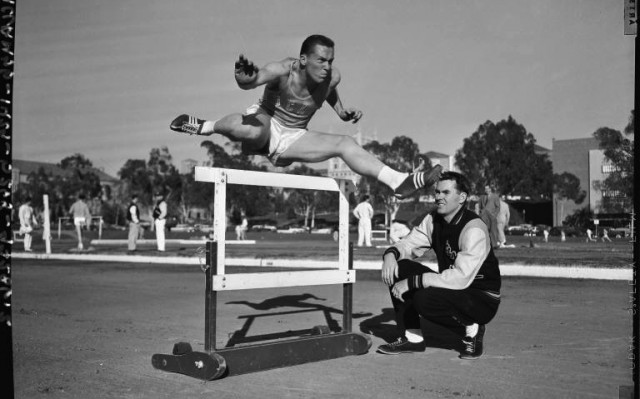 I am proud to say that Rafer Johnson is a fraternity brother of mine. We went to school 40 years apart and on different sides of the country, but we are both brothers in Pi Lambda Phi Fraternity.

His fraternity story is more remarkable than mine. Before he joined, Rafer had a part time job at the Pilam house cleaning tables in the dinner hall.

He grew to become good friends with the brothers, and the brothers extended a bid for him to join the fraternity.

However, Rafer could not afford to join. The brothers understood this, and they decided to increase their dues in order to pay for Rafer’s share.

This made Rafer the first black man to join a national fraternity at UCLA. The rest of his time at UCLA was just as remarkable.

At UCLA Rafer was in the Air Force ROTC. He joined the Campus Crusade for Christ and eventually chaired the UCLA chapter of that organization. He played basketball for UCLA and legendary coach John Wooden and eventually became student body president.

Not bad for a guy who attended school on an academic scholarship (he chose this over the perceived more prestigious athletic scholarship).

Pi Lambda Phi names our annual award for the most outstanding undergraduate brother after Rafer Johnson. One of the great honors of my life is to have won this award my senior year in college.

And as remarkable as Rafer’s time at UCLA was, the years after were more impressive. To learn about his unbelievable life – check out this awesome article.