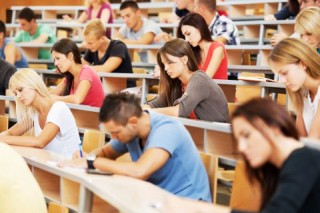 There are two schools of thought on whether a fraternity should have a minimum GPA.

One is that the fraternity should expect their brothers to be held to a higher standard than the general student population.  If they don’t meet this loftier goal – there should be a form of punishment to get them there.

The second way is that the school has already established academic standards for each student.  It is the school’s job to determine if the brother is meeting their academic requirements – not the fraternity.

I see the point in both – and I am not saying one is better than the other – but I personally fall into the second category.

My thought is you can’t establish standards because all curriculum’s are different.  Are you going to bust the electrical engineering major’s balls because he made a 2.4 when compared to the philosophy major who made a 2.7?

Also, I never like punishing brothers because it simply doesn’t work.  It just pisses people off.

My suggestion is to give them the tools to do well.  I have written a bunch of academic tips HERE that no one reads but are probably the most beneficial articles on the entire site.

A few other thoughts – your brotherhood needs to be sure everyone takes an active interest in everyone’s academics.  You know if a guy is struggling.  The brothers should be falling over themselves to make sure he is getting the help he needs to stay in school.  That is what fraternity is about right – taking care of each other?

Also, study and take classes together.  This is a way of holding each other accountable, and it will lead to academic success in your brothers.