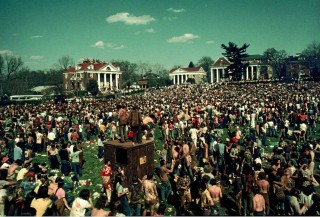 Fraternities are social organizations. Wouldn’t it be great to have a social event that doubled as an awesome fundraiser? You can!

A fraternity at my school had a great idea. They held Pig Stock (a play on Woodstock). Pig Stock was a huge pig pickin’– a barbeque for those of you not from the Carolinas.

The setup was simple. They found an open field where they could have the event. They built a stage and hired a couple local bands to play. They put some tables out for people to eat and made the event BYOB. It was a very simple setup.

The genius of their plan was in their marketing. They sold tickets on campus for weeks prior to the event. This served as great publicity, and got peoples money early. The brothers in the fraternity regularly wore T shirts promoting the event. They created a hype and an aura around the even that pretty much guaranteed its success.

If my memory serves me correct, the tickets cost $10 each. I don’t think there were a thousand people there, but there were definitely several hundred. The fraternity made an easy $5000 that day – and had a fantastic time in the process.