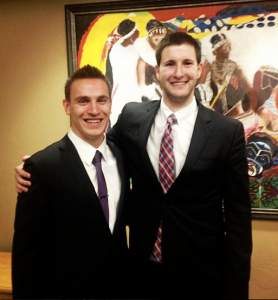 The fraternity treasurer is probably the third most important position in the chapter, behind the president and the social chair. Needless to say, the brotherhood trusts this individual with a large sum of money, their money, every semester. It is imperative that the treasurer does a good job.

The fraternity treasurer has two responsibilities. The first is collecting dues, the second is establishing and keeping track of the budget.

Collecting dues is a challenge for a lot of chapters. It was a huge challenge for my fraternity. It was not uncommon for a brother to run up a debt of a few thousand dollars and then quit instead of paying it.

In fact, we actually took one such brother to small claims court. He didn’t show up, and we won the court case. However, our state’s legal system is not that simple. Once you win in court, you have to file the claim with at the courthouse. The guy had a judgment against him, but that didn’t really matter since he left the state once he graduated. That debt remains unpaid.

The chapter needs to do this because otherwise you create animosity among brothers. The animosity is justified because the delinquent brothers are at best mooching and at worst stealing from the chapter. No one likes a mooch or a thief.

The best way to get brothers to pay their dues on time is to give them a financial incentive to do so. Most brothers will jump at the chance to save some money, and that will eliminate a lot of procrastination. Also, it will separate the brothers who paid their dues from the brothers who didn’t early in the semester.

Also, the fraternity treasurer needs to provide each brother with a financial report every week. On this financial report there needs to be a list of brothers who are delinquent on their dues and how much they owe. Some brothers are of the opinion that it isn’t cool to share this type of financial information. I strongly disagree. If the treasurer is the only person who knows what is going on, then the brotherhood can’t support him in collecting dues.

The second responsibility of the treasurer is to prepare and report out on the budget. To determine the budget the treasurer has to figure out the chapter’s fixed expenses.

Those include dues to nationals, IFC dues, house payments, ect. After that, he should figure out roughly how much to spend to achieve all the goals that the brotherhood agreed on. Dividing that number by the number of brothers should give you a rough estimate of what your dues should be. You obviously will want to work with the numbers to make sure the dues are manageable for every brother. Be careful not to be too aggressive when you massage the numbers. There is nothing worse than a chapter that runs out of money and can’t take advantage of the last few months of the year.

I am a big proponent in driving ownership in the organization. I agree that it is the treasurer’s, along with the president’s, responsibility to give each committee head a budget. Once the budget is given, it is up to the committee to be responsible for achieving the chapter’s goals with the money available to them. It is expected that the treasurer will not permit wasteful spending. However, the treasurer must not micro-manage the budget of any committee.

By running the chapter’s finances in this manner each brother will become accountable for their responsibilities. They will feel that they are an integral part of the chapter because of this responsibility. They will also have the freedom to achieve in ways that the fraternity leadership didn’t think was possible. This will never happen if a brother is micro-managed, or dictated on how they should spend their budget.

The end result will be a brother who takes pride in their chapter, and more specifically their accomplishments.

Once a budget the budget is established, it is the fraternity treasurer’s responsibility to make the chapter aware of how chapter funds are being spent. He needs to do this by providing a one page report on a few simple things. First, he needs to give the balance, and how much money is expected to be collected. Next, he needs to give a line item account of all the expenses that week. Then, he needs to tell what each committee budget was and how much has been spent. Finally, he needs to list all the brothers who are delinquent on their dues and how much they owe.

If this is provided at every meeting, a brother will never have the opportunity to gripe about where their dues are going.

One additional note, it is important to save a little bit for a rainy day. A chapter will inevitably come on hard times. Building a cushion to overcome these times is in the chapter’s best interest. Just think of the savings you will have if you save just 5% of every dollar the chapter receives. That savings could enable the brotherhood to take advantage of tremendous opportunities when they present themselves in the future.